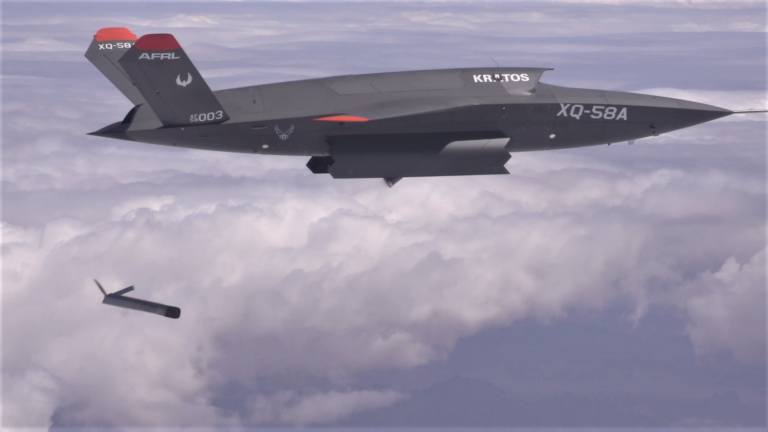 To explain that LCASD program is done with flight tests. WASHINGTON: The Air Force’s low-cost XQ-58A Valkyrie drone has tested a new capability — launching its own drone — designed to boost its abilities to counter enemy air defense missiles and protect higher-value aircraft such as fighters and tankers.

The Air Force Research Laboratory (AFRL) was pretty cryptic in its release, providing only the basic facts: that the test was conducted on March 26 at Yuma Proving Grounds; and it successfully launched the ALTIUS-600 “small, unmanned aircraft system (SUAS)” made by Area-I.

The Valkyrie, made by Kratos, also demonstrated an ability to fly “higher and faster” than in previous tests, Alyson Turri, AFRL demonstration program manager, said.

“Additionally, this unique and key mission function success adds an exclamation point to the 30-month development of the Valkyrie system by the Kratos and AFRL team, which resulted in a pre-production system with substantial operational capability, not simply a proof-of-concept flight demonstrator,” he added.

Finally, AFRL noted that the software and carriage needed to allow the Area-I mini-drone to be released from the Kratos-built Valkyrie were “designed and fabricated” by AFRL with the two companies.

ALTIUS 600 immediately after launch from an AC-130J gunship.

The ALTIUS-600 has a gross weight of about 27 pounds, a wingspan of 100 inches, and a body length of 40 inches, according to Area-I’s website. Its payload bay can carry up to six pounds — making it suitable for intelligence, surveillance and reconnaissance; electronic warfare; counter-drone and even kinetic kill weapon systems, the company claims.

The test was the sixth flight test for the Valkyrie. It’s fifth test, held on Dec. 9, showed its ability to fly in formation with an F-35 Lightning and an F-22 Raptor, AFRL announced on Dec. 15. The X-58A has been in testing at AFRL since 2019 as a “loyal wingman” under the Low Cost Attritable Strike Demonstrator (LCASD) program.

Indeed, last July AFRL said that the fifth test of the Valkyrie was the final one planned — what has changed is unclear. And a request to AFRL for clarification of what program the new test is related to went unanswered.

During the test, the Valkyrie carried gatewayONE, a software package developed under the ABMS effort that can ‘translate’ between the incompatible machine languages of the F-22 and F-25, allowing them to communicate. Indeed, the Valkyrie is sometimes referred to by the Air Force as “attritableONE” — using the ABMS program’s naming convention.

Confusing matters even more, the Valkyrie is one of the contenders for AFRL’s Skyborg program, which is exploring multiple missions for autonomous, low-cost drones, including teaming with piloted aircraft. Skyborg has three parts: the low-cost drone; the ‘autonomous core system’ serving as the drone’s ‘brain;’ and the on-going experiment campaign.

AFRL Commander Brig. Gen. Heather Pringle said in February that Skyborg, which is one of the the lab’s highest priority Vanguard programs, could reach initial operating capability (IOC) as early as 2023. And in that conversation with the Mitchell Institute, she referred to the same Dec. 9 flight test of the Valkyrie as forwarding the Skyborg effort. Next steps will be more tests this year, she added, involving “multiple prototypes.”

The Air Force in December announced 24-month contracts for three Skyborg competitors: Boeing, for $25.7 million; General Atomics Aeronautical Systems Inc., for $14.3 million; and Kratos Unmanned Aerial Systems Inc., for $37.8 million. Up to now, however, only Kratos’s Valkyrie has flown with the Skyborg autonomy software. AFRL said the next round of flight tests would take place this July.