Acasă Administratie The US has a narrow edge in its talent pool, its hardware... 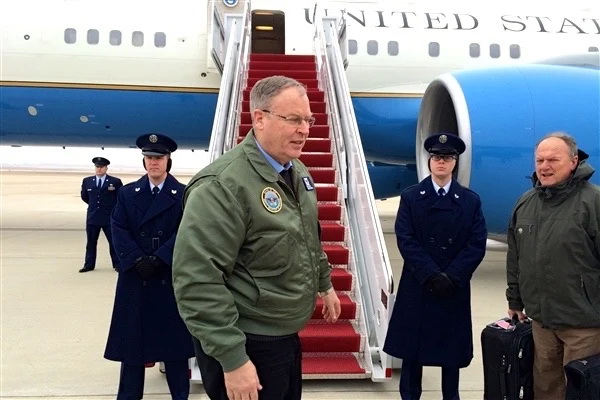 The US has a narrow lead on China in artificial intelligence, but the Chinese are catching up fast. In fact, they’re already at least narrowly ahead in three of six critical areas, the vice-chair of the National Security Commission on AI said today.

“We do not believe China is ahead right now in AI” overall, Robert Work said, speaking at a Pentagon press conference alongside Lt. Gen. Mike Groen, the director of the Joint Artificial Intelligence Center. But, Work went on, “look, AI is not a single technology, it is a bundle of technologies” – what professionals in the field call the “AI stack.”

As Work and the commission’s final report explain it, the AI stack has six interdependent layers. The foundational layer is not technology but people who know what to do with it. The second most fundamental layer is data, the raw material machine learning must ingest en masse to evolve. Then there’s hardware, on which everything else runs; algorithms, the complex and ever-evolving equations that drive machine learning; applications, which apply algorithms to specific functions; and integration, which ties different applications together.

Now, not every layer of the stack is equal. China’s advantages are largely in the more visible upper levels of the stack, while America’s are in the more fundamental levels, making their impact less obvious and more long-term.

“Because talent, hardware, and algorithms are so central and important to the stack, we judge the United States, actually, is ahead of China in AI technologies more broadly,” Work said. “But … the Chinese are far more organized for a competition, and have a strategy to win the competition, and are putting in a lot of resources.”

They’re also operating without the ethical constraints that bind the US and its allies, agreed Work and Lt. Gen. Groen. Selling military drones and surveillance software to authoritarian states, for example, are routine for China but deeply controversial in the United States. The willingness to exercise unscrupulous options both gives China an advantage in the competition and makes a Chinese-dominated world a problematic place to live in.

“The Chinese export autonomous systems to nations around the world, in you know, in some places that that have some pretty ugly conflicts that are underway, [with] lots of human suffering and not a lot of world attention in some cases,” Groen said. “So here you are you have a nation that’s proliferating autonomous systems with no ethical baseline, no sets of controls, no transparency.”

“This is as much a values competition as it is a technological competition,” Work said.

As the first tangible result of the Advanced Battle Management System (ABMS), the Air Force...

The news comes months after Sikorsky-Boeing announced it would be using Honeywell’s HTS7500 turboshaft engine...