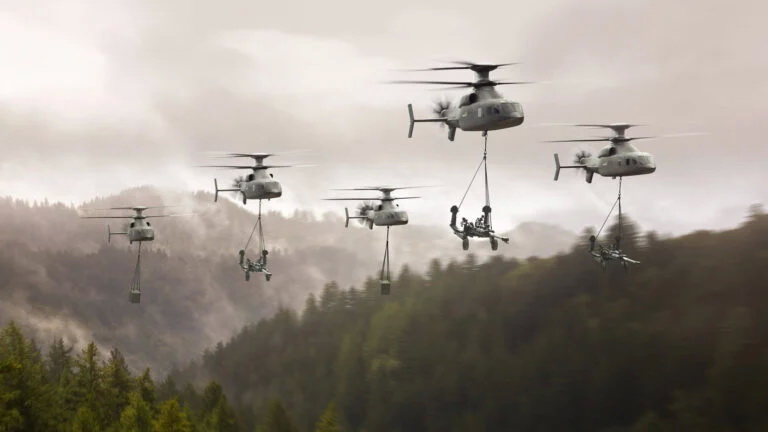 Most military veterans swear by the gear they’re familiar with. But in this op-ed, former Marine Corps V-22 test pilot Scott Trail says that while tiltrotors are a good fit for the Marine Corps’ long-range missions, a compound helicopter is a better match for the Army. Why? Read on! The Editors.

Which aircraft should the Army buy to replace the Reagan-era UH-60 Black Hawk? On March 30, the Army announced that Bell Textron’s V-280 Valor tiltrotor and the Sikorsky-Boeing Defiant X compound helicopter will advance to the next phase of the Future Long Range Assault Aircraft (FLRAA) program.

Based on my research and my first-hand experience as a tiltrotor test pilot in the Marine Corps, the compound helicopter is the clear choice when it comes to choosing the configuration that best supports the Army’s mission and minimizes costs.

While tiltrotors offer superior high-altitude cruise performance, that’s less relevant to future high-intensity warfare where Army aircraft will have to stay low to avoid advanced anti-aircraft defenses. Also ,the compound helicopter is more agile at low altitude, hovers better at high altitudes in hot weather, and can maintain tighter formations. More importantly, the training and military construction costs to switch from the H-60 to a compound helicopter will be much lower than the transition costs for a tiltrotor.

Key characteristics of the long-range assault mission are the ability to fly fast at altitudes below 200 feet, then mass on the objective to deliver combat power. Landing on the objective quickly is critical to maintain the element of surprise and overwhelm enemy forces.

The Marines already have a long-range assault platform in the V-22 tiltrotor. You could reason that the Army may follow the Marine Corps’ decision and leverage their tiltrotor experience. However, the Marines and the Army have different missions. The tiltrotor configuration is in line with the Marine’s vision statement to, “fight and win our nation’s battles… respond quickly to the complex spectrum of crises and conflicts, and gain access or prosecute forcible entry operations.” (emphasis added) Winning battles, responding to crises and prosecuting forcible entry requires an aircraft that flies far and fast, especially in the vast Pacific.

The Army’s FLRAA supports a different mission. The Army’s mission is: “To…win our nation’s wars… indefinitely seizing and controlling those things the adversary needs most…” (emphasis added) Winning wars and indefinitely seizing and controlling resources requires the ability to rapidly buildup combat forces and sustain operations, where tight formations and hover performance are critical capabilities. It is in these areas that the compound helicopter excels.

Both of these missions will be required to prevail in the Asia-Pacific region.

To avoid China’s sophisticated air defenses, assault aircraft must fly low to avoid detection. Flying low prevents the V-280 from cruising at high altitude and decreases its advantage in fuel consumption over the Defiant X compound helicopter. In airplane mode, the low acoustic signature of the V-280 is an advantage. But, as the tiltrotor transitions for landing, it is “loud as hell” according to a report by The War Zone. And historically, the way ground troops get warning of incoming helicopters is by hearing them – which means louder aircraft give the enemy more time to prepare and even shoot them down.

Rapid Build Up of Combat Power

The speed and range of both the V-280 and the Defiant X is transformational. However, rapid buildup of combat power is not simply achieved through speed. It is achieved by flying tight formations and landing in confined landing zones.

This increased spacing is not an arbitrary requirement. In June of 2012, the Air Force crashed a Special Operations CV-22 , which was caused by the trailing CV-22 flying through the rotorwash of the lead aircraft. While the V-280 will likely require less separation than the V-22, tiltrotor formation separation will be significantly greater than the Defiant X compound helicopter. Importantly, increased separation also increases the number of flights required to build combat power, which increases exposure to enemy fire, especially during the initial landings when soldiers are most vulnerable.

Once rapid buildup of combat forces is complete, the Army’s mission turns to sustaining operations. This phase places an emphasis on hover performance and vertical maneuver in rugged terrain. With its larger, coaxial rotor, the Defiant X’s hover efficiency and performance exceeds the V-280’s, especially under high, hot conditions. The Defiant X will carry more and have increased power margins at altitude compared to the V-280.

The Congressional Budget Office (CBO) estimates that between 450 to 900 FLRAA could be purchased at a cost of $23.8-$47.6 billion. It is likely the Army will need more FLRAA to replace the current H-60 fleet of 2,279 helicopters. With this number of new aircraft required, even a relatively small sustainment cost increase on a per aircraft basis will result in substantially increased budget requirements. According to Defense Acquisition University, 72 percent of life-cycle costs are incurred during the sustainment phase of acquisition. To ensure a successful program, such costs must be weighed heavily, and the costs to transition from the H-60 to one of the two FLRAA options will likely be dramatically different. The best way to limit that “switching cost” is to choose a configuration that is most similar to the H-60’s training and infrastructure needs.

Due to the unique flying characteristics of the V-280, the Army will need to train its pilots to fly three different aircraft: the way the Marines train V-22 pilots today: first a helicopter, then a fixed-wing airplane, and only then a tiltrotor.). On this model, in addition to the 32 weeks of Army helicopter instruction, tiltrotor pilots will require 20 weeks of multi-engine training and 20 weeks of simulator and in-flight tiltrotor training, almost a year-and-a-half of training to fly the tiltrotor. This training burden requires additional aircraft, instructors, infrastructure, and military construction. While compound specific training will be required, it will certainly be less than tiltrotor training and will negate the need for multi-engine training.

Since the Defiant X’s rotor diameter is similar to the H-60’s 53’ 8” rotor, the same ramp space and existing hangar space accommodates the Defiant X aircraft, thus avoiding any new military construction costs. In contrast, the Valor is 81.8 ft wide, 45 percent wider than the Defiant X. That increase in width requires wider hangars and larger ramps, which would mean increased military construction costs. A unit of six V-280s requires expanding the ramp and hangar by approximately 150 feet. Multiplied across 900 tiltrotor FLRAAs, it would mean more than four miles of extensions to ramp and hangar space.

In this competition, the tiltrotor wins for speed and range. For rapid buildup of combat power and sustaining operations, the compound helicopter’s hover performance and tight formations provide a clear advantage. When it comes to the configuration that best supports the Army’s mission while minimizing life cycle costs, the Defiant X performs best where it matters most.

Scott Trail is a retired Marine CH-46E helicopter pilot, V-22 developmental test pilot, and a member of the Society of Experimental Test Pilots. He served as a Secretary of Defense Corporate Fellow at Sikorsky from 2014-2015, but has never received any compensation from that company, Boeing, or Bell.

“We’ve done about all we can do with this ship and we’ve maxed out the...