INCISIV National
Acasă Armata “Modular open systems architecture… is the foundation of all our future modernization,”... 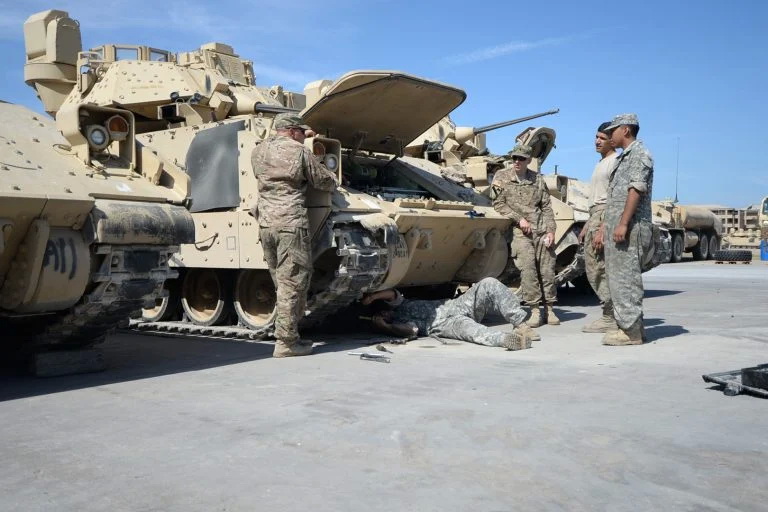 The Common Modular Open Architecture will establish unified standards for a wide range of future air and ground vehicles, allowing them to share components. Said Brig. Gen. Glenn Dean, program executive officer for Ground Combat Systems (PEO-GCS), said Tuesday at the 2021 Defense Innovation Summit: “As we’re developing the architecture template that we’re using for our future vehicles, we’re working with our counterparts at the C5ISR Center, at the Aviation and Missile Center down in Huntsville, [and] PEO-Aviation, to adopt some of the things that are in their architecture.”

The Army has begun formal talks with industry about a bold open architecture initiative that could upend how companies sell to the service.

The goal is a single set of meta-standards linking all these different types of components and vehicles. That should ease upgrades and lower costs for the Army, and it could be a sales bonanza for companies whose CMOA-compliant technologies are picked for one system after another. But it is likely to be a crushing blow for manufacturers that rely on “vendor lock,” selling tightly integrated proprietary tech that competitors can’t upgrade.

Army officials recently held their “first-ever meeting with defense industry executives about the Common Modular Open Architecture (CMOA) modernization initiative,” the service said in a Tuesday email to reporters, inviting them to a Monday briefing with Jeannette Evans-Morgis, chief systems engineer for the Assistant Secretary For Acquisition, Logistics, & Technology.

The CMOA project was the brainchild of Bruce Jette, who served as ASA(ALT) until he left in January; the acting ASA(ALT) is former Hill staffer Douglas Bush.

Jette told me before he left government that CMOA was one of the three most important things he’d worked on.

Bruce Jette, then Assistant Secretary of the Army for Acquisition, Logistics, & Technology, testifies to the House.

“There are a handful of things that we’ve put in motion at the ASA(ALT) level that are really critical to us moving forward in the future,” Jette told me in January: policy to protect contractors’ intellectual property, investment in 3D printing and other advanced manufacturing, and finally CMOA. The Army needs all three initiatives working together, because companies won’t participate in open architecture or 3D printing efforts without robust protection for their Intellectual Property (IP) rights that keeps competitors from simply copying their tech.

Jette’s advice to his successors? “Those [three] things are the real pieces of meat you’ve got to continue to tend to,” he said. “If we can get better management of our intellectual property, tie it to a truly common modular open architecture, we can then stop buying [one-offs] and start buying capabilities” – and potentially 3D print key components in the warzone, dramatically streamlining logistics.

The Army’s Optionally Manned Fighting Vehicle (OMFV), meant to replace the Reagan-era M2 Bradley, will pioneer the new open-architecture approach. But the whole point is that multiple future ground and air systems will use CMOA as well, allowing the Army to install any CMOA-compliant hardware or software on any system it sees fit.

“Modular open systems architecture: It is the foundation of all our future modernization,” Dean said. “It is a bridge to … CMOA, Common Modular Open Architecture.

“It’s sort of like, to use a cell phone analogy, not iPhone, but Android,” Dean said. That is, the Army will let private companies develop multiple versions of the hardware and software, just as there are multiple companies making phones using the Android Operating System. (Contrast that to Apple’s monopoly on manufacturing iPhones). But, just as Google controls the Android OS, the Army will say what common interface standards all that hardware and software have to follow.

Where possible, Dean said, the Army will simply adopt existing commercial standards, such as USB. Where specific standards are needed for military purposes, it’ll build on those already existing in specific areas:

Now, open architecture undermines a longstanding business model, in which a company integrates disparate technologies into a system for the government in such a way that only that company, and none of its competitors, can install future upgrades. But, open architecture also allows innovative companies to sell their best technologies over and over again to multiple programs.

“I think it gives them more customers, more platforms as opposed to ‘hey I’m bidding on Bradley’ [alone],’ Dean said. “It really should open up more opportunities.” It should also make it easier for system integrators to get different tech to work together, he said.

“This opens up an entire portfolio of things that can go on the future vehicles, or our legacy vehicles [as retrofits],” added Maj. Gen. Richard Ross Coffman, Next Generation Combat Vehicles director at Army Futures Command. “Now, when the best widget in the world is out there, [potentially] years after a vehicle is [initially] produced… as long as you are [CMOA] compliant, then you can participate , and the Army can procure that and not have to pay the OEM [Original Equipment Manufacturer] an exorbitant fee.”

“It’s plug and play,” Coffman said, “so it just absolutely offers many, many options.”

UPDATED The Common Modular Open Architecture isn’t just for future systems: It’ll be retrofitted where possible in upgrades to existing vehicles and aircraft as well.

“Initially, the focus … was, ‘hey, on future platforms, let’s draw a line in the sand, [and] let’s make sure we incorporate a common modular open approach,” said Brig. Gen. Robert Barrie, Program Executive Officer (PEO) Aviation, in a Thursday afternoon phone call with reporters. “And indeed, we will do that on our future fleet….

“But we’re also taking every opportunity we can to bring that into the enduring fleet as well,” Barrie continued. “What we have committed to the aviation enterprise and to the army is that we will very aggressively pursue that on our enduring fleet.

“Each single dollar that we bring in the way of investment towards our enduring fleet will be run through a process that determines, is it compliant with our vision for an open system approach? And if not, what would we need to do to make it more compliant [so] we can… apply that across multiple platforms?” Barrie said. “That’s something that, quite honestly, we haven’t done well in the past.”

The HASC tactical air and land forces subcommittee wants the Air Force to explain “how...

At the moment, there are no plans to reduce the Air Force’s plans to buy...

ROMANIA CYBER AND COMMUNICATIONS STRATEGIES at the Black Sea Macro Zone to enrich the global...