INCISIV National
Acasă Anchete “e don’t have a military reason to go to the Moon today,... 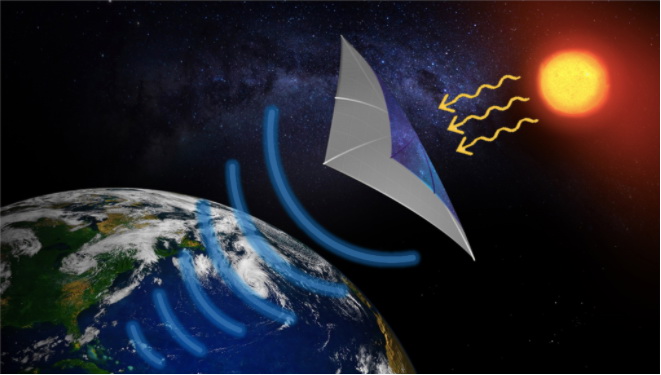 The first payload experiment under the lab’s multi-faceted project to develop satellites to harvest the Sun’s rays for electrical power will fly on the ISS in 2023, she told reporters yesterday. The experiment, called SPIRRAL, for the Space Power Infrared Regulation and Analysis of Lifetime, will demonstrate “thermal management” — i.e. heat regulation — technology for solar power satellites.

Arachne and SPIRRAL are two of the subcomponents of AFRL’s Space Solar Power Incremental Demonstrations and Research (SSPIDR) project. Each of the experiments is to validate one of five different types of technology foundational for solar power satellites.

In theory, space-based solar power networks could provide electricity to far-flung military bases without the need for expensive, complicated and vulnerable fuel-supply convoys. In addition, the Air Force is eyeing solar power satellites as possible ‘gas stations’ for spacecraft operating in cislunar space around the Moon or even further out in the solar system.

DoD has had an on-again, off-again love affair with space-based solar power. But recently, national security space leaders have become increasingly interested in the potential for future military operations in cislunar space, with a wary (some would say perhaps even paranoid) eye on Chinese space ambitions in particular. And solar power satellites could provide easier to access, and cheaper in the long run, power for spacecraft that have to traverse the vast volumes of space between the Earth and the Moon, and the rest of the solar system.

Indeed, Space Force Chief Scientist Joel Mozer told reporters yesterday that the recent classified ‘cislunar summit’ led by AFRL had “participants from the Intelligence Community, as well as NASA. While neither Mozer or other AFRL officials would provide much detail, he said the goal of the meeting was to ensure coordination as the various government agencies develop plans for space activities to the Moon, Mars and beyond.

“[P]art of the importance of getting folks like that together is really to coordinate across the interagency on what we’re doing in cislunar space,” he said.

The goal, he explained, is to build complementary “technology road maps” and “synchronize” activities, as the US plans to go back to the Moon “this time in a sustainable way.” What that means, he said, is that “the whole government needs to go there, and the Department of Defense needs to be prepared to provide defense out there.”

Mozer elaborated that while there isn’t a direct role for Space Force in NASA’s lunar exploration plans, there are indirect roles for the service: “I mean we don’t have a military reason to go to the Moon today, but we do have long term-objectives that include the expansion out to the Moon and beyond.”

Mozer said that “probably our biggest priority” for cislunar operations “is being able to establish the communications and the domain awareness that goes out to the Moon. … We need to develop the systems that allow us to see what’s going on, because the activity at the Moon is just going to increase over the next few years. It’s not that far in the future.”

Farther ahead, he said, Space Force is interested in technologies like “using in situ resources –so, water mined from the Moon to do things like provide oxygen for rocket propulsion. These are things that the Space Force is going to need to put in its arsenal in the future, and the logistics that go along with that.”

Mozer noted that he leads a “science and technology partnership” with his counterparts at NASA and NRO, respectively NASA Chief Technologist Douglas Terrier and NRO Chief Scientist Byron Knight. “We are all spacefaring organizations within the US government, and it only makes sense for us to coordinate our investments so that we’re not duplicating effort or going in incompatible directions. I think Congress would expect nothing less.”

Under the space-based solar power concept, satellites with very large solar panels would collect the sun’s free and ubiquitous radiation, convert it on-board to microwaves (or optical waves) and beam that energy  to so-called rectennas, or rectifying antennas, to collect and distribute to users. (A rectenna is a special type of receiving antenna that converts electromagnetic energy into direct current (DC) electricity. They currently are used, for example, in wireless radio.)

Arachne, which is SSPIDR’s flagship experiment, is based on the Helios bus provided by Northrop Grumman Space Systems under a $25 million contract. The experimental satellite will carry various day-to-day operating systems and the experimental SSPRITE payload (also being developed by Northrop Grumman) designed to demonstrate solar energy collection, explained SSPIDR Project Manager James Winter in an email today.

SSPRITE, for Space Solar Power Radio Frequency Integrated Transmission Experiment, “is the primary payload for the Arachne flight experiment. While Helios supplies the power and the hosting platform, SSPRITE is the system that will demonstrate the solar power collection, the conversion of that power to radio frequency, and the beaming capabilities we are testing,” Winter elaborated.

SSPRITE “consists of an array of ‘sandwich tiles’ which consolidate the entire process of energy collection, conversion, and beaming into a single unit. This is a potentially game changing concept, as it allows the technology to be scalable and opens the possibility of creating larger systems that can be utilized on a much greater scale,” he said.

SPIRRAL is a separate sub-project from Arachne/SSPRITE, Winter explained, a payload aimed directly at testing materials that can withstand the wide temperature swings in the outer space environment that could cause subsystems to fritz. Temperature management is super critical for solar power satellites, which need very thin, lightweight materials (for example for the giant solar panels), Winter said.

“Large, thin structures typically experience large temperature swings on orbit which can create stress in electronics, solder joints, the material the arrays are made of itself and can cause damage to a spacecraft,” he said. “SPIRRAL is testing variable emissivity materials that may offer a solution to reduce these temperature swings that we can then apply to a large scale space solar power system.”

Another experiment currently in ground testing is called SPINDLE or the Space Power Incremental Deployables Experiment, Winter said. He described SPINDLE as “a deployable structures experiment that will feed our understanding of what sort of structure will best support the arrays needed for a large scale space solar power system.” The payload includes “a thin panel array folded to fit within a specifically sized space” that would unfurl once the spacecraft carrying its desired reached orbit.

AFRL “will evaluate the need for an on-orbit demonstration” for SPINDLE “after ground testing is completed,” he added.

“[N]obody was watching too closely to see just how far these Chinese components and hardware...