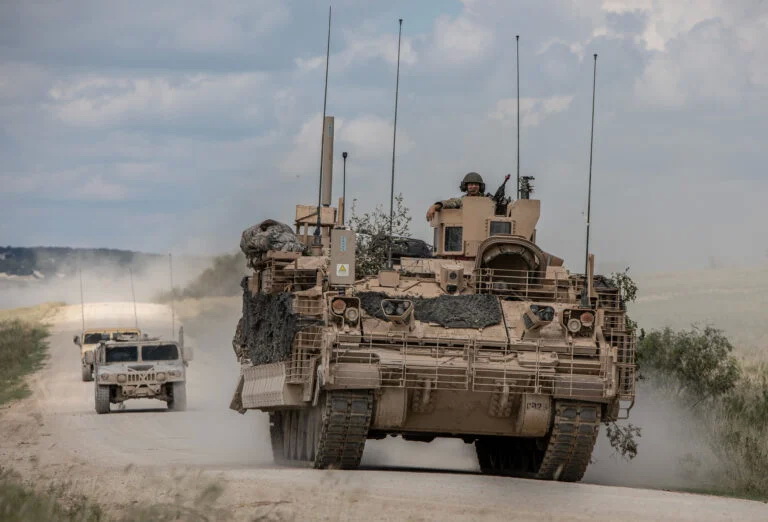 The tanks, they are a-changin’. the Army’s deadline to submit concepts for a new Optionally Manned Fighting Vehicle that will replace the Reagan-era M2 Bradley is just 11 days away, April 16. The service is already buying a replacement for the even older M113, a tracked workhorse that fought in Vietnam. And it’s experimenting with remote-controlled Robotic Combat Vehicles and even exploring unmanned options to replace the massive M1 Abrams main battle tank.

But how does all this new technology translate into better tactics and more options for commanders? To get a glimpse of that future armored force, I sat down for an exclusive interview with the armor modernization director at Army Futures Command, Maj. Gen. Richard Ross Coffman.

The Army envisions drones and ground robots advancing ahead of humans in future wars. (Enemy forces are at the left of the chart, friendly forces are moving right to left).

“All of these systems are specifically designed to increase situational awareness and understanding of the commander so they can make decisions faster,” Coffman told me. “They’re going to move faster because they’re going to give information to commanders more rapidly and reduce the risk” of stumbling into an ambush during a rapid advance.

Reagan-era vehicles, let alone Vietnam-vintage ones, just don’t have the electrical wiring to support a lot of cutting-edge communications and sensors. But nowadays even civilian vehicles have cameras all around to automatically warn of danger, and modern war machines are built the same way, to detect much more serious threats than a car crash. What’s more, the military sensors are being networked, so the commander can see what every vehicle in their formation sees, dramatically expanding their view of the battlefield.

Now add to that network some relatively expendable robots — both land and air – that you can send to scout ahead of your human forces. That makes it possible to move much faster.

What limits the pace of an armored advance isn’t the physical speed of the vehicles or even the difficulty of the terrain: It’s the risk of ambush. The more uncertain you are of the enemy’s location, the more time you spend checking potential ambush spots. For an armored force, that can be a particularly laborious process, especially if you have to stop and dismount foot troops to investigate buildings, swamps, dense woods, or other areas tracked vehicles can’t enter. Conversely, the better you know where the enemy is and – just as crucial – isn’t, the more rapidly you can advance.

“The aerial and ground unmanned vehicles will allow us to move much faster,” Coffman told me, “[because] if you know where the enemy is located, you can move very rapidly. If you don’t know, then you must conduct reconnaissance… so you’re not just blindly walking into an enemy ambush.”

Of course, reconnaissance, sensors, and networks are never perfect, and sometimes even the smartest soldier gets ambushed. For those occasions, you really want to have a vehicle tough enough to keep you alive when it takes a hit.

What’s more, the tougher your vehicle, the more risks you can take, which – again – allows you to move faster. (In fact, the original purpose of the tank was to restore mobility to the Western Front by advancing through machinegun fire, flattening barbed wire, and crossing trenches). While the Robotic Combat Vehicles are lightly armored and relatively expendable, the new manned combat vehicles will be much more survivable than their predecessors.

That’s especially true against underbody blasts from roadside bombs and land mines, threats that can slow vehicle movement to a painstaking crawl. The M113 “aluminum coffin” was so vulnerable to mines in Vietnam that troops routinely rode on the roof instead of inside, while the M2 Bradley and M1 Abrams were designed for a defensive war against invading Russians, a war in which the minefields would be laid by NATO, not the enemy. By contrast, modern machines like the M113 replacement, the tracked Armored Multi-Purpose Vehicle (AMPV), and the Humvee successor, the 4×4 Joint Light Tactical Vehicle (JLTV), are specifically designed to absorb and dissipate blasts from below.

AMPV is based on the Bradley design – it looks like a Bradley with no turret – but its larger, stronger hull incorporates lessons painfully learned since 9/11.

“AMPV is more survivable than a Bradley,” Coffman told me. “What you’re seeing is the benefit of over a decade of combat operations in the Middle East. The EFPs [Explosively Formed Penetrators] that our enemy used against us, the large- double stacked, triple stacked mines that we saw the enemy use, now we’ve accounted for those in our designs.”

Good armor and situational awareness are the biggest contributors to battlefield mobility, but simple speed matters, especially cross-country. This is another of the advantages the new AMPV has over the venerable M113.

“Our M113s were really the slowest vehicles that we had on the battlefield…Even on flat roads they just couldn’t keep up with the M1 tank,” Coffman said. “AMPV will be able to absolutely maintain pace with the Abrams.”

Now, AMPV isn’t intended to advance alongside the M1 Abrams and M2 Bradley in the first wave of an assault. It’s a second-line vehicle, well-armored but lightly armed, meant to follow close behind the frontline force, replacing a wide range of M113 variants. The five AMPV models include an armored ambulance, a mobile surgery, a mobile command post, a mortar carrier for close-in fire support, and a general-purpose hauler of troops and supplies.

“By increasing the mobility, survivability, and capability of our workhorse, which is the AMPV, we’re increasing the pace that the whole team can move,” Coffman told me.

It’s also easier to keep AMPV moving, since it’s far less prone to breakdowns and far easier to maintain than the geriatric M113.

“Maintaining a 60-year-old fleet of vehicles is very expensive and the supply chain is very hard to maintain,” he said. “AMPV parts will be readily available, and it will have common parts with the PIM “and the existing Bradleys.”

(PIM is Paladin Integrated Management, the latest upgrade to the M109 howitzer, which entered service in Vietnam but has been almost totally rebuilt. An even more advanced Extended Range Cannon Artillery version is now in prototype).

If AMPV is so great, why not just make a heavily-automated, heavily-armed version with a turret and use that to replace the existing Bradley Infantry Fighting Vehicle? “Someone could absolutely propose that” as their Optionally Manned Fighting Vehicle concept, Coffman told me. But OMFV could be something much more innovative and even strange.

For example, tthe Army’s desired “characteristics” for OMFV – they’re not yet formal “requirements” – say a platoon of vehicles should carry 30 fully equipped infantry as passengers. But it carefully doesn’t say how many vehicles are in a platoon, so you could conceivably have a single huge one carrying 30 passengers or 30 mini-machines carrying one apiece. “It could be a jet ski or a yacht,” Coffman said.

The one non-negotiable demand: OMFV must carry infantry through enemy fire to their assault point more safely and effectively than ever before. That includes better armor and mobility, as well as improved sensors and weapons, since the best way to ensure your own survival is to kill the enemy first.

“The situational awareness that we’ll see will be exponentially better than what you have on a Bradley today,” Coffman said. If you combine that with longer-ranged weapons, he said, “we will be able to identify the enemy before they can identify us and destroy the enemy beyond the capabilities of our adversary.”

The M2 Bradley has been repeatedly upgraded since its introduction, but after 40 years in service, the vehicle is reaching its limits.

Now, the OMFV is being designed to outfight comparable vehicles: the middle-weight, moderately well-armed and armored troop carriers known as Infantry Fighting Vehicles. It’s not being built to take on main battle tanks. That role remains that of the massively armored M1 Abrams main battle tank (MBT) – at least for now.

However, the Army is studying a potential future vehicle or vehicles to replace the Abrams, Coffman said. There’s no official name, although “Decisive Lethality Platform” and “Optionally Manned Tank” have come up in previous reporting. Even more so than OMFV, the Army is looking at a wide range of possibilities, including unmanned and optionally manned vehicles.

“Everything is on the table at this point,” Coffman said. “We’re exploring technologies, we’re exploring options for what comes after the SEP v3,” the latest upgrade of the much-upgraded Abrams.

There have been advancements with main battle tank technologies that we are very, very excited about,” he told me. Those include AI-aided target recognition, low-recoil cannon, automatic loaders, active protection against anti-tank weapons, and signature management to make a tank harder to detect on infrared or by its radio-frequency emissions. “There’s just a whole bunch of things that are interesting and fun to think about,” Coffman said, “[for] how we can better wage war as we close with and destroy our future adversaries.”

“Someone told me I was like Chicken Little, but I prefer Paul Revere,” said Sen....