INCISIV National
Acasă Armata The B-21 program will not undertake traditional “block upgrades” to beef up... 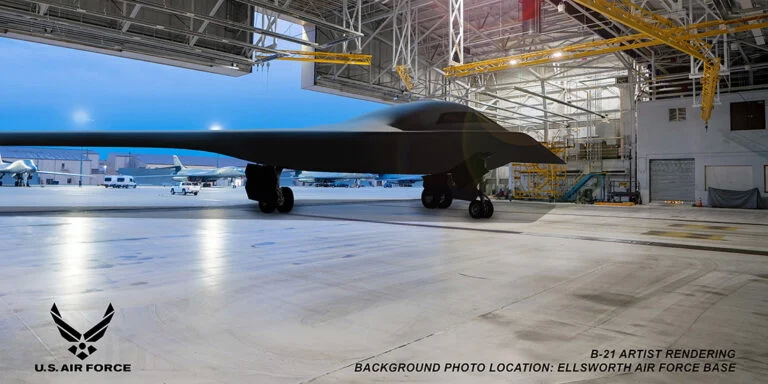 The novel requirements and acquisition processes being used to develop the B-21 bomber will slash the time it will take to get the Raider to initial operating capability (IOC), Air Force Global Strike Commander Gen. Timothy Ray says.

In a wide ranging interview with Mitchell Institute Dean David Deptula today, Ray also revealed that the Air-Launched Rapid Response Weapon (ARRW) hypersonic missile being developed for the conventional bomber fleet will undertake another flight test next month, after failing the first flight test of its booster in April.

As one example of how the new approach is speeding B-21 development, Ray told the Mitchell Institute today he expects integrating the AGM-158/B Joint Air-to-Surface Standoff Missile — Extended Range (JASSM-ER) onto the B-21 will be a breeze compared to what it took to fit the B-2 with the ground attack cruise missile.

“I think it will take me about one tenth of the time to put the JASSM-ER on the B-21 than it did the B-2. A tenth of the time,” he said, with obvious pride. Ray noted that the program has been praised by Adam Smith, chairman of the House Armed Services Committee, who is notorious for his sometimes scathing criticism of weapon systems suffering cost/schedule overruns, such as the F-35 Joint Strike Fighter.

One key factor in this success is the fact that Air Force Global Strike Command has been in essence granted pre-approval to integrate new subsystems, so it doesn’t need to go back through the Pentagon’s complex requirements process each time, Ray explained.

“The Joint Requirements Oversight Council has agreed that we don’t need to come back to ask for a new radio, or new weapon or new sensor, or new defensive system — it’s part of the bomber,” Ray said.

The other enabler is the digital design and engineering approach being used by the service and prime contractor Northrop Grumman — an approach that as Ray noted also is being taken with development of the Ground Based Strategic Deterrent.

This will in turn, eliminate the need for massive “block upgrade” programs to pump up performance, at least for the most part, Ray added.

Ray explained that because of this new way of working, the program not only move fast but keep stability in the requirements even while making improvements. “We can keep requirements stable — and the two big challenges to any acquisition system are stable requirements and stable funding,” he said.

The Air Force has asked for $2.87 billion in its fiscal 2022 budget request for the B-21, an increase of only $30 million over last year’s appropriation. While the program is deeply shrouded in secrecy, the service has said it expects the first model should fly some time in 2022, and a second is currently being built at the Northrop facility in Palmdale, Calif.

Ray was optimistic about progress with the ARRW, despite what he called “a few small challenges.”

ARRW, a joint Air Force and DARPA project being developed by Lockheed Martin, is a boost-glide vehicle that uses rocket propulsion to bring a glide vehicle up to speeds greater than Mach 5.  The ARRW’s booster rocket failed its first flight test on April 5, the service announced April 6, with the booster simply failing to launch from the B-52 H Stratofortress. It was the eighth test for the ARRW.

“I think we’re gonna do fine with it here next month,” Ray said regarding the ARRW. “Talking to (Brig.) Gen. Collins (program executive officer at the service’s armament directorate), you know, they’re being smart about this,” he said. “We’ll get there. This is not a problem that’s beyond us; it’s just a matter of time.”

ARRW being loaded on a B-52H Stratofortress for testing at Edwards AFB, Calif.

The Air Force has requested $161 million in procurement funds to buy 12 ARRWs. The service also budgeted another $238 million in research and development funds for the program. The budget documents explain that the 2022 R&D effort is “near completion” and that those funds will be used to “complete manufacture and flight test of ARRW all-up round test vehicles; transition program to early operational capability.”

Ray said he didn’t have the details at his fingertips about whether all 12 ARRWs actually bought would be used for only for flight testing, or whether some would be kept for operational use.

As well as supporting ARRW, Ray was an early advocate for equipping the bomber fleet with the super-secret Hypersonic Attack Cruise Missile (HACM). HACM will use an air-breathing scramjet engine rather than a boost-glide vehicle. Since it would be much smaller than ARRW, HACM could be fitted not just to big bombers but to Air Force fighters as well.

HACM is a “new start” for 2022, according to the Air Force budget justification documents. The service has slated slightly more than $200 million in research, development, test and evaluation (RDT&E) money for the effort.

“The HACM project integrates Air Force and Defense Advanced Research Projects Agency (DARPA) enabled system technologies into a prototype that will demonstrate the viability of a multi-mission weapon concept to be fielded as a long range prompt strike capability. HACM will design, develop, manufacture, and test, a number of prototype vehicles to inform decisions concerning future HACM acquisition and production,” the budget documents say.

Chinese companies are offering drones for export that they claim can stage lethal airstrikes autonomously,...

The Air Force should field several iterations of improved drones before 2030 — not just...