INCISIV National
Acasă Anchete If industry can “turn this into a human transport mechanism — which... 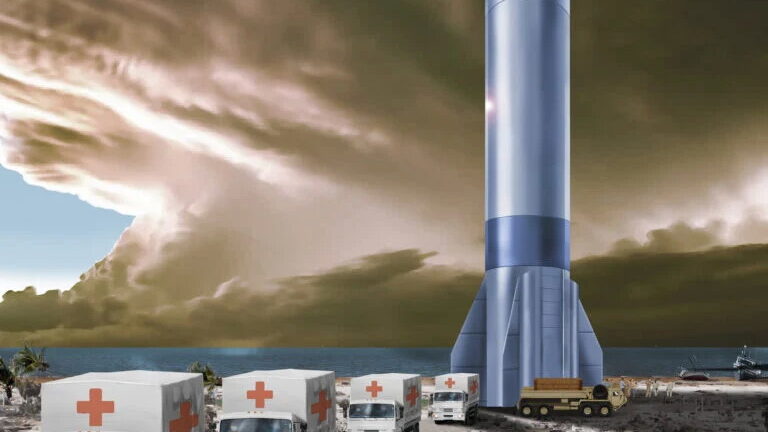 Two decades after the Marine Corps got laughed out of the five-sided building for a plan to launch small teams into global hot spots on spaceships, DoD is now putting serious effort behind the idea, but they’re starting with cargo, maybe followed by Marines some day.

It’s called Rocket Cargo, and it is the Air Force Research Laboratory’s newest Vanguard project aimed at getting new capability in the hands of warfighters as fast as possible.

“I know people always wonder why are we looking at this idea again. This idea has been around since the dawn of spaceflight; it’s always been an interesting, intriguing idea, but … We look at it about every 10 years and it’s never really made sense in the past,” Brig. Gen. Jason Cothern, vice commander at Space Force’s Space and Missile Systems Center (SMC) told reporters today. “What has frankly changed is a major emergence on the commercial side with much higher capability rockets at a much lower cost point than we’re used to seeing.”

Greg Spanjers, AFRL’s program manger, explained that “if you have a very, very large rocket, the amount of mission you can transport at one flight becomes far more attractive.” Not only are there a number of commercial space firms already building large rockets, he added, there also are “multiple companies” using their own money to develop “reentry systems that allows you to get the global reach to return the payload anywhere on the planet.”

Noting that he too was once a “scoffer,” Spanjers stressed that AFRL “did a considerable amount of analysis” and from that “decided it’s time to make an investment, and see if this turns into an operational capability this time.”

Thus, Rocket Cargo aims to tee the US military up as a ground-floor user of commercial space lift, Spanjers said. The goal isn’t for Space Force to build any of its own cargo rockets, he rushed to add. Rather the project is aimed at figuring out whether commercial rockets can meet DoD global transportation needs, and if so, what modifications — for example, changes to military cargo containers — might be needed.

“We just want to set ourselves up to be the first customer and the early adopter of what they’re building on the commercial side,” Spanjers said.

Rocket Cargo is funded at nearly $48 million in the 2022 budget request, way more than the teeny $9.7 million allocated in 2021. The project “will demonstrate new trajectories and ways to fly large rockets, the ability to land rockets at austere locations, and design & test an ejectable pod for air drop,” according to the Space Force’s research, development, test and evaluation (RTD&E) budget justification. The end-goal is to be able to deliver cargo anywhere on Earth within an hour.

As a Vanguard, the project is designed to speedily bring capability to warfighters — and AFRL is partnering with both Space Force’s Space and Missile Systems Center (SMC) and Transportation Command (TRANSCOM), said Maj. Gen. Heather Pringle, AFRL director.

TRANSCOM this past October signed a a Cooperative Research and Development Agreement (CRADA) with SpaceX and XArc to explore the concept, raising a few eyebrows at the time. That CRADA, Pringle said, provides “an opportunity” for AFRL to leverage, and a solid foundation for the future transition of the project to a program of record.

“They have the mission for rapid logistics, and so they are one of the potential recipients of this,” she said. “This is a new mode that they might be able to leverage as they consider air-, land-, sea-based cargo delivery, and so we just want to present them with a new option.”

Spanjers explained that while the TRANSCOM effort is informing Rocket Cargo work, AFRL fully intends issue its own contracts.

“TRANSCOM has been a great partner, we have learned a lot about the logistics mission, far more than we ever thought we would learn,” he said. “They’ve been a great partner and they’ll continue to be a great partner, but the CRADA is their arrangement with two companies that they competitively selected. That CRADA won’t be part of this program, we’ll be issuing our own contracts in the very near future.”

Spanjers added that the project is “looking at rockets with 30 to 100 ton potential capacity. Note that 100 tonnes is about the size of a C-17 load out.”

While SpaceX is the only commercial company that has been actually testing a large reusable rocket and cargo vehicle, called Starship, with a much publicized goal of hauling equipment and people to Mars, Spanjers stressed that the project will be open to all interested vendors. He noted, for example, that three companies were vying to ferry people and supplies to the Moon under NASA’s Human Lander System (HLS) project. What he didn’t say is that after funding all three firms for an initial stage, NASA in April awarded SpaceX a $2.9 billion contract for HLS, beating out Blue Origin and Dynetics.

Key elements of the project will be early science and technology research on “novel ‘loadmaster’ designs to quickly load/unload a rocket, rapid launch capabilities from unusual sites, characterization of potential landing surfaces and approaches to rapidly improve those surfaces, adversary detectability, new novel trajectories, and an S&T investigation of the potential ability to air drop a payload after reentry,” the budget documents state.

“All we really want to do is see where the S&T is for packaging it — utilizing that capability to get that cargo or equipment to the front edge or wherever we go to the battle … or to resupply, or wherever we need to go in a very quick manner,” Gen. Arnie Bunch, head of Air Force Materiel Command, explained in a briefing today with the Defense Writers Group. AMC will “help come up with the use cases” and “the business case analysis,” he added.

As for Starship Troopers, while AFRL isn’t ruling anything out, it’s not at the moment a direct goal of the effort.

“As far as putting, you know, people on board these rockets like troops and whatnot, I think that’s a decision for far down the road and we’re just going to watch what happens on the commercial side,” Spanjers said. “If they turn this into a human transport mechanism — which some of the companies are talking about doing — sure the DoD would be interested in exploring options for that, just as we do with the airlines, and the shipping industries today.”

“Our mission in the Space Force will become to protect that commerce, and I like...

Passing on the Panama Channel ...