INCISIV National
Acasă Anchete “Let me be really clear here, because I’m not giving you a... 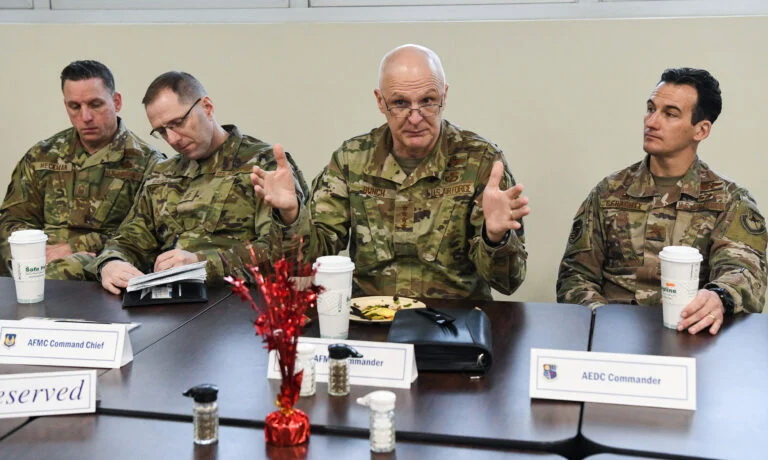 “We’ve been able to take a a little bit of money out of my budget and put it over there, but it’s not very much,” he told the Defense Writers Group on Friday. “The bigger version of where we are trying to go” will be clearer in the five-year budget plan starting with fiscal 2023, he said.

Nonetheless, Bunch was adamant that AFMC already is laying foundations for the campaign, designed to lower chronically high sustainment costs by giving Air Force maintainers more control over design and manufacturing processes from the beginning and improve its capability for in-house servicing of weapon systems.

“Let me be really clear here, because I’m not giving you a budget number does not mean we are not doing anything,” Bunch said.

AFMC currently is concentrating on “capitalizing” lessons being learned under the two big Air Force programs pioneering the digital design and engineering approach, he said: the Ground Based Strategic Deterrent (GBSD) and the Next-Generation Air Dominance (NGAD) programs.

“So what is happening in GBSD — which is one of our bell cows for how this is going to work — we’re taking those tools and we are now sharing those across the enterprise so that you can get the licenses and everything at a lower cost and you can go in and utilize those tools,” he said.

The goal, he expalined, is for future programs to be set up from the get go to ensure that AFMC has the necessary data rights, analytical models, and a well-trained workforce to oversee contractors and step in when needed.

Further, Bunch said, “as new programs come in, we are shaping where they want to go with their digital plans so that we can capitalize on the new tools that they’re bringing in.”

The bottom line in the so-called Digital Campaign, he explained, is “having the technical wherewithal” within AFMC to carry the bulk of sustainment activities up to producing its own parts — rather than the situation today where the service faces ‘vendor lock’ and problems with finding old parts because suppliers have gone out of business.

However, Bunch stressed, the effort is not just limited to AFMC’s Life Cycle Management Center, but is being implemented by the entire command to include: Air Force Research Laboratory, the Air Force Test Center, the Air Force Sustainment Center and the Air Force Nuclear Weapons Center. “We’ve even brought in the Air Force Installation and Mission Support Center, so that we can hopefully get to a digital twin of what’s going on on our installations, and we would have a better idea of tracking that,” he said.

Another key element in the campaign is AFMC’s push to modernize its information technology (IT) infrastructure across the board, Bunch stressed. When AFMC launched the Digital Campaign last February in tandem with then-Air Force acquisition czar Will Roper, the need for a new “IT backbone” was identified as the foundational need for success. This is because modern IT is required for personnel to be able to efficiently use digital design, digital engineering and predictive maintenance tools.

The campaign has six lines of effort, according to AFMC’s website:

AFMC further has put out a “digital guidebook,” Bunch noted, “that we’re sharing with everyone so they can read and learn about what we’re trying to do.”

The command held its first industry day last September, and since then had “talked to industry on multiple occasions,” he added. “We’re now working into the contract language we want to put place.”

AFMC further has added 12 people to the staff to lead the effort, Bunch said.

“If I’m adding people to it, that tells you I’m committed to it,” he said.