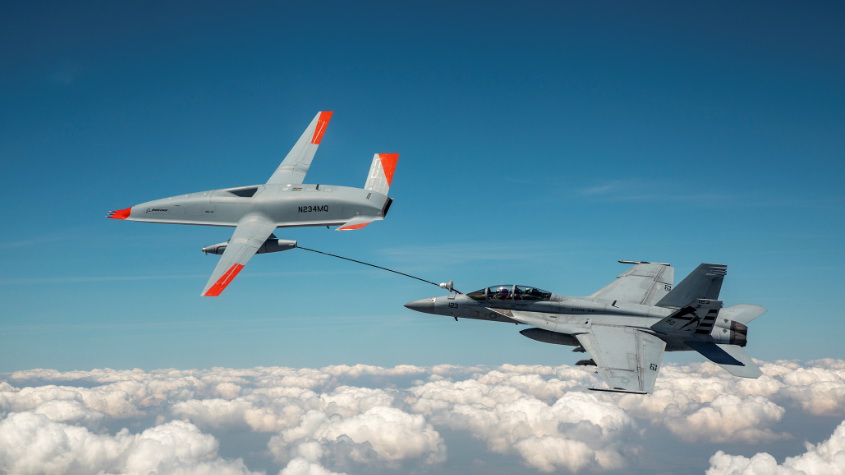 It lasted just minutes and transferred only 300 pounds of fuel, but it was a historic first when a manned aircraft refueled in mid-air from a drone tanker. That tanker was Boeing’s prototype MQ-25 Stingray, designated test asset T1, and the manned aircraft was a Navy F/A-18F Super Hornet.

Over four-and-a-half cautious hours on Friday, two Navy test pilots painstakingly approached and withdrew from the drone, approached and withdrew again, testing everything and all performed as the models predicted. Then they connected the Hornet’s refueling probe to drone’s hose-and-drogue fuel line a total of four times, twice for dry runs and twice taking on actual fuel: 300 pounds at 10,000 feet, then 25 pounds at 15,000.

All systems were nominal, with just one surprise, Boeing program manager David Bujold told reporters. The MQ-25 was so quiet the test pilots could actually hear each other in the cockpit while they were right behind it taking on fuel. That’s a stark contrast from how it’s typically done today, when one Super Hornet takes on fuel from another fighter, and the engine noise is deafening.

The idea with MQ-25 is for the drones to serve as dedicated tankers, instead of the current situation, where fighter squadrons have to dedicate some of their jets to hauling gas instead of weapons. Freeing up fighters is a much less ambitious goal than the original concept for the carrier-launched drone program, which began life as a stealthy unmanned bomber called UCLASS. But the Navy decided an unmanned tanker was less technically risky while still being tactically valuable.

There’s still plenty of innovation in the MQ-25. “Stingray will be the world’s first operational carrier-based unmanned aircraft,” said the Navy program manager, Capt. Chad Reed. It will provide the Navy with invaluable hands-on experience of how to operate unmanned aircraft in the congested airspace and crowded deck of a supercarrier, he said, laying the foundation for more complex drones to come. “MQ-25 is the first step,” he emphasized.