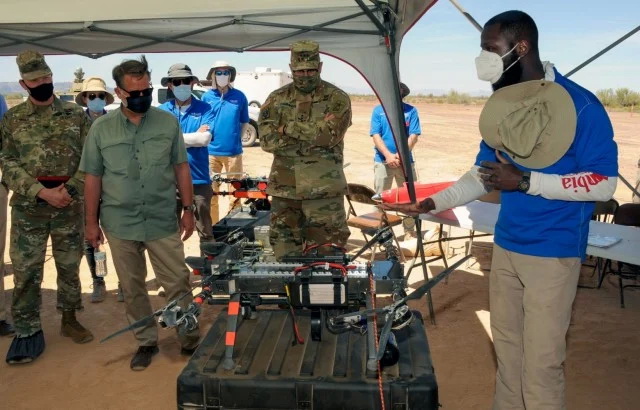 ELTA, teamed with Iron Drone, and XTEND recently demonstrated their systems at Yuma Proving Grounds. The demos are part of the Army’s effort to select Low Collateral Effects Interceptors (LCEI) to counter the rapidly increasing threat from small drones.

The demos were organized by the U.S Air Force, the Joint Counter small UAS Office (JCO) and the Army Rapid Capabilities and Critical Technologies Office (RCCTO) .

ELTA’s Drone Guard is a multi-sensor system developed for the military and homeland security market. It combines a 3-D radar for detection and tracking with identification by electro-optical sensor slaved to radar. It also uses disruption by a directional jammer.

“We now offer an additional layer of defense – an autonomous drone that gets a first direction from the Drone Guard radar and then flies to “interception point” so that the operator can see the hostile drone and assess how dangerous it is,” Zvi Yarom, general manager of ELTA’s land directorate told BD.

“The use of EW interception in war zones is very problematic, and our joint solution solves the problem. In the recent demo we proved the capability of the joint system,” Melamed said.

According to ELTA and Iron Drone, their system needs no human intervention other than the command to launch. DKD uses a combination of on-board processing, autonomous flight control and optical target lock to find and strike the target. It contains an entanglement net of cut resistant wires that spring-release during flight and entangle the enemy’s rotors for an extremely high kill rate. DKD is modular and scalable to carry additional effector payloads and can be integrated to accept cues from drone detection sensors or Command and Control (C2) systems.

The third Israeli Company that took part in the demo is XTEND, who offered the Skylord Griffon system.

Ido Baron, VP of business development of XTEND told BD that by using an AR device and single-handed controller, a soldier can easily control the drone and perform complex tasks remotely with precision. Its interface enables the operator to “step into” a remote reality and engage targets effectively yet safely.

The drone weighs 900 grams and has a max speed of 150 km/h “To operate this drone a soldier needs minimal training and no prior expertise is required,” the company’s VP told BD. “The operator feels like he sits in the drone’s cockpit and that allows a new operator to intercept hostile drones after only three days of training.”

Baron explained that the drone carries a very light-weight net. “Our drone flies exactly over the enemy drone, releases the net and it kills the props,” he said. “We have proved its capabilities in Israel and now in the U.S ” he said.

Baron revealed that 150 systems are currently used by US Special Operations Command.