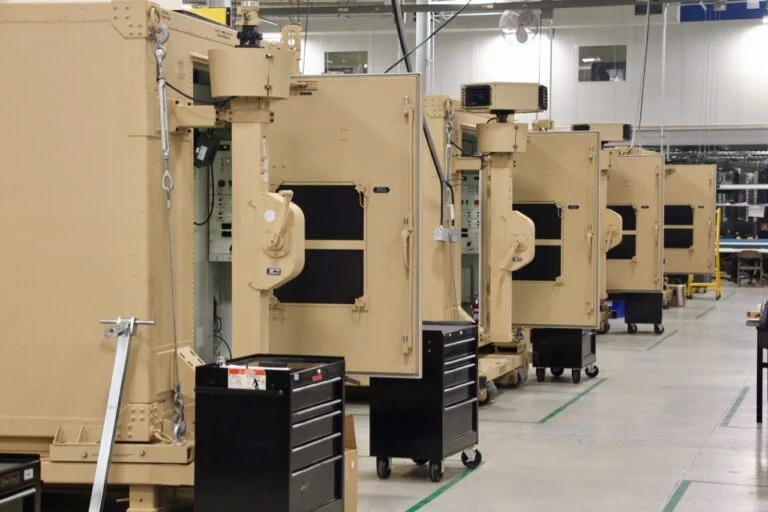 The inclusion of a beefed up electronic attack, combining the pod on the surrogate cruise missile with the effects of a more powerful ground-based system, marks an important achievement for IBCS. Should the Pentagon go to war with China or Russia, it will need to overcome the clutter and confusion electronic attack can cause, because both adversaries have placed great emphasis on EA capabilities.

Mark Rist of IBCS maker Northrop Grumman explained that this effort involved EA against the radars involved in the test, while previous tests had been directed against the communications systems binding IBCS to its sensors. Rist is Northrop’s program director for the missile defense network.

The test included several other firsts, including an F-35 sharing data to the Army’s IBCS and then live firing a PAC-3 missile to destroy the cruise missile. Two F-35s flew during the risk reduction test, which was done to prepare the system for Initial Operational Test and Evaluation this fall.

IBCS is being pushed by Northrop as the Army’s core system to contribute to Joint All Domain Command and Control, one of the centerpieces of All Domain Operations, the new American way of war.

Today’s test demonstrated for the first time a Joint Track Manager Capability (JTMC). This is what allowed IBCS and the CEC to share G/ATOR radar data, Northrop Grumman said in a press release. Two Army Sentinel radars were also part of the test.

What all this demonstrated for Flight 6 of IBCS testing (technically, it’s actually the eighth test) is that IBCS really and truly can connect previously incompatible systems and let any command post on the network get high-fidelity data from different kinds of radars in different locations.

“The integration of additional sensors from multiple services continues to show the power inherent in the IBCS architecture and design to incorporate and integrate joint sensors across multiple domains,” Christine Harbison, vice president of combat systems and mission readiness at Northrop, said in a statement. “By enabling joint operation and utilizing multiple sensors operating in various bands, IBCS was able to operate through the electronic attack environment so soldiers can identify, track and ultimately intercept the threat.”

Smart tools and emerging technologies can deliver the Next-Gen Interceptor more affordably and faster than...