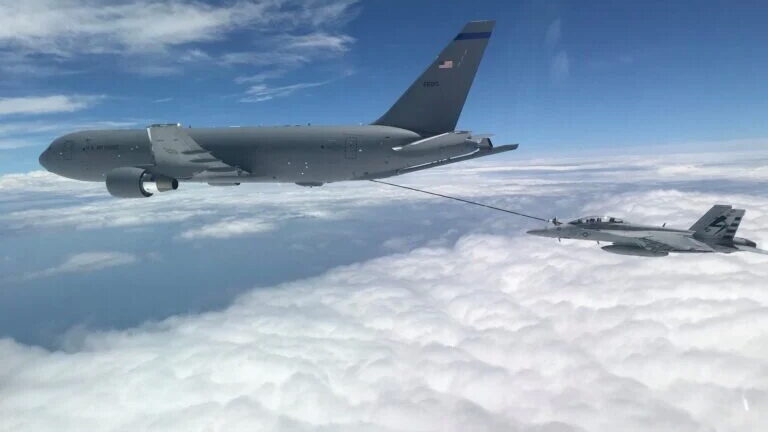 Not quite a month after a first set of KC-46 refueling operations were okayed for routine use, Air Mobility Command (AMC) head Gen. Jacqueline Van Ovost has approved a second set — this time allowing the air refueling boom to be used for some limited US Transportation Command missions.

“This is the first ICR decision regarding the air refueling boom mission set, allowing the KC-46 to become taskable” by TRANSCOM for the C-17 Globemaster III, B-52H Stratofortress and other KC-46 aircraft, the Air Force announced today.

ICRs, for Incremental Capability Releases, are designed to open up wider usage of the KC-46 Pegasus on a rolling basis, to take pressure off the hard-pressed fleet of older KC-10 and KC-135 tankers, according to Air Force officials. In essence, ICRs tell operators it’s OK to use the troubled Boeing tanker for certain day-to-day jobs.

But the ICRs only apply to missions for which the troubled Boeing tanker has already been certified as capable of performing; allowing operational use as opposed to use only for testing or exercises. A number of missions remain off limits because of continued deficiencies with the aircraft — most infamously, the problems with the tanker’s Remote Vision System (RVS) camera used by the boom operator.

Including the RVS, there are six Category-1 deficiencies (i.e. problems that could endanger personnel) — such as fuel leaks and a so-called “stiff” refueling boom — that must be fixed before the Pegasus will be certified as fully operational for its gamut of missions, from medical airlift through aerial refueling. That certification is expected in fiscal year 2024, Van Ovost told the Defense Writers Group in February.

The very first ICR was approved by Van Ovost on July 9, and okayed day-to-day refueling operations using the central line drogue refueling system for some missions. A drogue system comprises a hose, the nozzle-like drogue that the fuel-needy plane connects to with a probe.

The centerline drogue system previously had been certified as safe for all types of missions. It can be used to refuel the F/A-18A-F and EA-18G. The July 9 announcement did not specify which missions were made “taskable” by TRANSCOM.

The Air Force plans to buy up to 179 KC-46 tankers, under a $4.9 billion contract. (Due to a myriad of problems, Boeing now has spent more than that in fees.) The service in January awarded Boeing new production contracts for KC-46 lots six and seven: $1.7 billion for 12 more tankers; and $2.1 billion for 15 more, respectively. This brings the total number of tankers in production to 94.

The Army has big ambitions for the Terrestrial Layer System, meant to detect, decrypt, and...

Two sources with knowledge of the program told Breaking Defense that Boeing now projects the...