Acasă Armata „Our secretary has been very clear that he wants us to move... 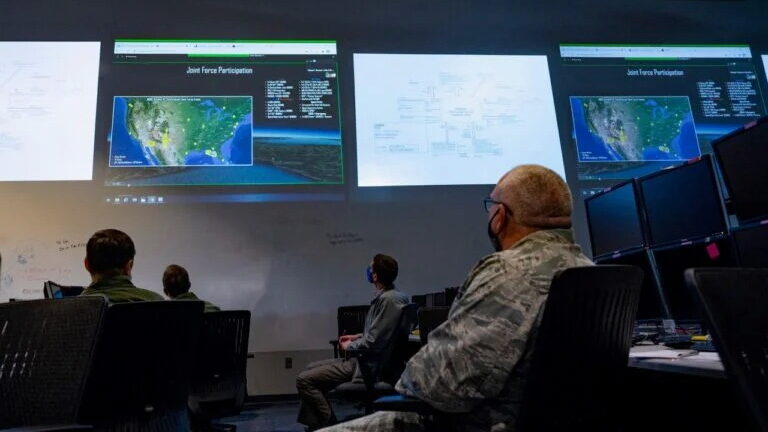 This piece was originally published Sept. 2, in a format that described Dunlap’s comments about INDOPACOM and SPACECOM as being focused on ABMS. After publication, Dunlap reached out to clarify that those comments were not about ABMS, but rather broader tech experimentation. As a result, Breaking Defense decided to pull the original article and republish at a later time with more details from Dunlap.

WASHINGTON: Over the next year, the US Air Force plans to shift its focus on tech development and experimentation efforts towards capabilities that can be rapidly transitioned to operators at US Space and Indo-Pacific Commands, according to Preston Dunlap, chief architect for the Air Force and Space Force.

Dunlap told the Potomac Officers Club (POC) last week that he is “excited that we’ve got real clear focus to be able to support INDOPACOM, SPACECOM and their Air and Space Components, amongst all the other Combatant Commanders in FY22.”

The goal, he explained, is not just to bring in new technologies, but to inject them into current capabilities while making sure that those current capabilities themselves can be integrated on the battlefield. Thus, during the next fiscal year, his office will be conducting what Air Force leadership now dubs “force integration exercises” to test out both the new tech and operational concepts in the field.

“Our secretary has been very clear that he wants us to move rapidly from experimentation and  demonstration to fielding,” Dunlap told the POC.

“We had great success this year bridging the so-called ‘valley of death’ by integrating and deploying real capabilities, like DARPA’s data translation program known as STITCHES — which was mere inches from falling off the cliff,” Dunlap told Breaking Defense this week in follow-up comments. “We’ll look to drive similar capability transitions through multiple force integration activities next year, culminating with Pacific Iron and Valiant Shield in the summer.”

STITCHES — which (brace yourself) stands for  System-of-Systems Technology Integration Tool Chain for Heterogeneous Electronic Systems — was first demonstrated in one of the Air Force’s Advanced Battle Management System (ABMS) experiments last August. It was transferred into an Air Force program following the July 8-28 series of experiments sponsored by Dunlap’s office, under the new moniker Architecture Demonstration and Evaluation.

Pacific Iron is an annual Pacific Air Forces exercise; this year’s event was held in Guam in July. Valiant Shield is a joint exercises in the Indo-Pacific theater held every two years, last staged in September 2020.

At last month’s annual Space Foundation Space Symposium, Kendall also signaled his wish to create more synergy between Space Force activities and those of the ABMS effort — noting that he expected the new space acquisition czar to focus on the “technical integration” of space systems with ABMS and DoD’s overarching goal of a Joint All Domain Command and Control (JADC2) network.

ABMS was designed to build a military Internet of Things as one of the Air Force’s key contributions to the JADC2 development, and at its inception in 2019 was focused on experiments called “On-Ramps” to try out new technologies and capabilities brought to the table by industry. Last November, it was transferred out of what can be thought of as its “incubation” stage of experimentation to an acquisition program of record being managed by the Air Force Rapid Capabilities Office (RCO). At the time, the Air Force said the ABMS experiments would continue under Dunlap’s shop.

That apparently has changed, with the third and final ABMS On-Ramp being held last October. While the Chief Architect’s office has continued to lead experiments to develop new technologies, such as artificial intelligence, to fill technology gaps — including those that could be relevant to ABMS and JADC2 — the office is now focusing more broadly on building what the service dubs “an integrated architecture” and other tech needs identified as critical by Kendall’s office.

Dunlap and team are attempting to organize some $65 billion in department-wide modernization programs, of which ABMS is just one, around so-called mission architectures — that is, create organizational and technical structures to ensure various individual programs are designed to be able to actually work together and accomplish their given mission when handed over to commanders and operators.

“There’s a list of mission architectures that we think are important; three of those capture a strategic dimension, an operational dimension, and a tactical dimension,” Dunlap told the POC. “One of those is ‘decision superiority,’ which is a key element of being able to understand the deterrence space before conflict and understand the battle space in conflict.”

At the operational level, he said, the focus is “distributed, survivable operations,” which the Air Force has branded as Agile Combat Employment. “So, that’s anywhere from being able to have runway repair capabilities, to distributed communications and redundant pathways, to missiles, to UAS defense, to recognition that we’re going to get disrupted or jammed no matter where we are,” Dunlap explained. “Therefore, we’ve got to be able to flexibly maintain operations on the move and multiple locations, and have resiliency across the network.”

The third area — “one that DoD spends a lot of time on and probably will for a long time” — is “rapid kill chains,” Dunlap said. This involves moving data from sensors to shooters as rapidly and efficiently as possible, he explained.

That capability, to link sensors to shooters at machine speed, is at the heart of ABMS — and is enabled by a number of programs across the Air and Space Forces. It is also at the heart of DoD’s overarching JADC2 strategy signed out in June by Defense Secretary Lloyd Austin.

Dunlap noted in his POC remarks, however, that the concept of JADC2 continues to be less than fully defined.

“I think one of the difficulties that we have when we try to put our arms around what JADC2 is — and I ask people this question all the time — what is not JADC2?,” he said. “It’s very difficult to separate out what is and what isn’t, and everyone has a slightly different view on that.”

Instead, Dunlap suggested, the Air Force and DoD writ large might focus conceptually on how to best be able to manage modern warfare — that is, “to understand the operational environment and make sense of it, and take actions, whether you’re alone and unafraid at the forward edge or behind enemy lines, or you’re back helping orchestrate and orient others in the battle space.”