Acasă Actualitate The B-21 and future sixth-gen fighter will operate alongside drones, but what... 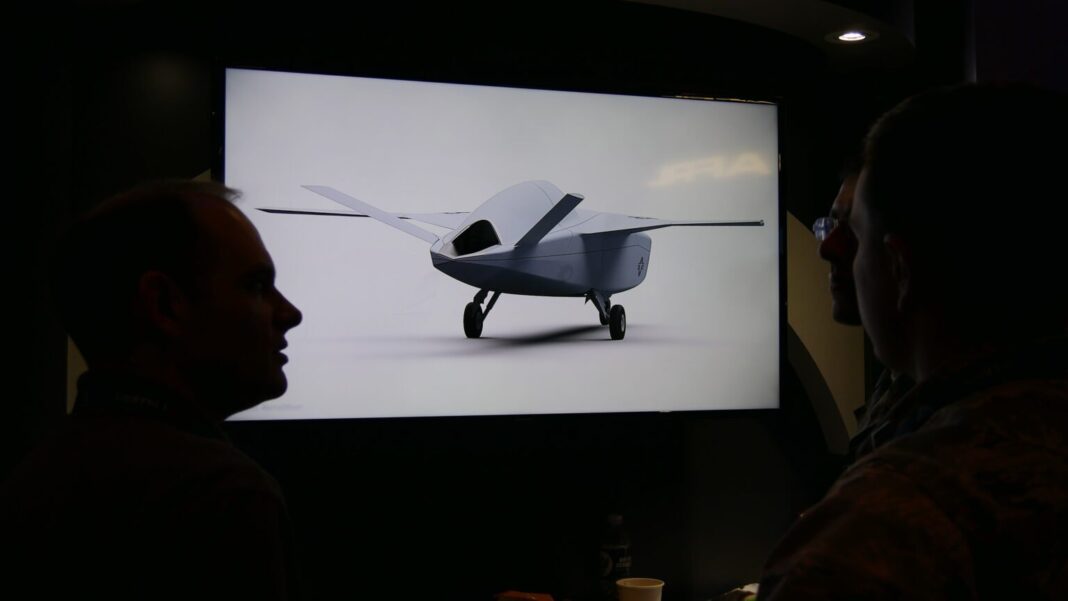 The Air Force’s fiscal year 2023 budget submission will herald two new classified drone programs — one unmanned counterpart for a stealth bomber, as well as a “loyal wingman”-style complement for advanced fighters. But much is still to be decided about the shape of both efforts, a source told Breaking Defense.

Air Force Secretary Frank Kendall first disclosed to Politico earlier this month that the service would insert funding in its fiscal 2023 budget request for two new classified combat drones, but no further detail was available at the time.

Days later at a public appearance, however, Kendall spoke more specifically about a drone counterpart for the B-21 and a “loyal wingman”-style drone that would fight alongside the F-35, F-22 and future sixth generation fighter. A spokesman for Kendall confirmed later to Breaking Defense that those two unmanned aircraft are the ones the Air Force will seek to fund in FY23.

Here’s what we know about each aircraft:

The Northrop Grumman B-21 Raider is slated to roll off the production line and make its first flight next year. As testing of the new stealth bomber ramps up ahead of its fielding in the mid-2020s, Kendall wants the service to begin defining what he calls the “B-21 long range strike family of systems,” which he believes should include some kind of drone.

“The B-21 is a very expensive aircraft. It has a certain payload and range. We’d like to amplify that capability it has to penetrate, which is valuable,” Kendall said during a Defense One event on Dec. 9.

“What we want is something that can go operate with it,” he said. “I won’t say accompany it — the tactics are very much to be determined. But we’re going to sort that out and think about unmanned combat aircraft and how to network them together under the control of an operator of the B-21, to operate as a formation in some loose sense.”

An Air Force source with knowledge of the program told Breaking Defense that the service is still in the earliest stages of defining what the new drone will do and how it should operate in conjunction with the B-21 — aside from keeping a low profile. “The last thing you want to do is draw attention to the bomber,” the source said.

One key aspect for the drone will be the sophistication of its communications suite and the security of the networks it uses, said Rebecca Grant, an aerospace expert with IRIS Independent Research. That, in turn will help inform its tactics, including how deep it can penetrate into enemy airspace and the proximity it can operate from the bomber.

“What information can you pass, and at what ranges?” she said. “And then [the question is] .. what do you need? Double cappuccino, electronic warfare, extra weapons? … I think that is going to take experimentation.”

Those details, Grant said, will likely remain a secret for a long, long time.

“Kendall was part of the group that downselected the B-21. He spent six years investing in these programs, and they also put in a really huge security protocol,” she said. “For valid security reasons — Russia and China — they’re gonna try to work this in the black [budget]. We’re not ever going to hear very much about this.”

The US Air Force is one of many air forces around the world interested in building a unmanned “Loyal Wingman” that can operate somewhat autonomously, performing missions too dangerous for human pilots or augmenting a manned fighter’s operations.

Australia is working with Boeing on its own formally titled Loyal Wingman aircraft, while the UK hopes to build a similar capability called Mosquito that will fly with its future fighter, Tempest. But up until Kendall’s remarks earlier this month, the US Air Force had not committed to a program of record for the concept.

The Air Force is “principally” looking to build a loyal wingman drone for the service’s sixth-generation fighter, also known as Next Generation Air Dominance, but could also be controlled by the fifth generation F-22 or F-35, Kendall said Dec. 9.

Under the service’s current thinking, a single manned fighter would be able to issue commands to “nominally, up to five” drones, he said.

“The idea is that the manned aircraft is essentially calling plays and is using those other unmanned combat aircraft basically as a formation to do things that make sense tactically,” he said. “This opens up a whole bunch of opportunities. But the exact mix of that, and what you carry on those unmanned combat aircraft, and what kinds of plays you would pre-program for the operators to select are all things we have to go sort out.”

On its face, the program sounds similar to several developmental efforts the Air Force already has in work, which Kendall said could be “feeders” for the classified projects.

Air Force Research Laboratory’s Skyborg program is seeking to build an autonomy module that could be integrated with different drones, providing a common artificial intelligence and interface for pilots to issue commands to mix of unmanned systems. Meanwhile, earlier this year, General Atomics and Kratos were awarded contracts for protoypes under the “Off Board Sensing Station” program, which aims to develop new unmanned aircraft that can host different sensor suites.

However, the Air Force source noted that many questions still need to be addressed by the service, including how best to strike a balance among affordability, disposability and capability.

Drones could be the “pawn in a chess game,” pushed out first to entice an adversary to reveal itself, the source said. They could be used as sensor beds that collect data and bridge communication systems. They could function as missile trucks, receiving targeting information from fighters and sending forth a burst of munitions. Or they could be highly sophisticated mini-fighters, capable of penetrating deep and looking much like NGAD.

Another option, the source said, is that the Air Force could buy several different unmanned aircraft to help fighters with different types of missions. That, in turn, “could create a different dynamic” in the defense industrial base, proving steady production work not only for the major aerospace primes, but for mid-tier companies like Kratos, General Atomics and Dynetics, the source said.

No matter the exact functions the loyal wingman drone performs, the idea will be to shorten the timeframe between the moment the Air Force first sees a target and the moment it strikes that target, IRIS’s Grant said.

“When you do see that fleeting Chinese missile target or that Chinese ship, when you’ve got it in your crosshairs, metaphorically speaking, do you then want anyone to be able to call down a lot of ordnance without having to wait an hour till that thing’s gone away or, you know, 11 minutes until the thing has gone away?”