Acasă Armata The Air Force worries that if it approves Remote Vision System 2.0... 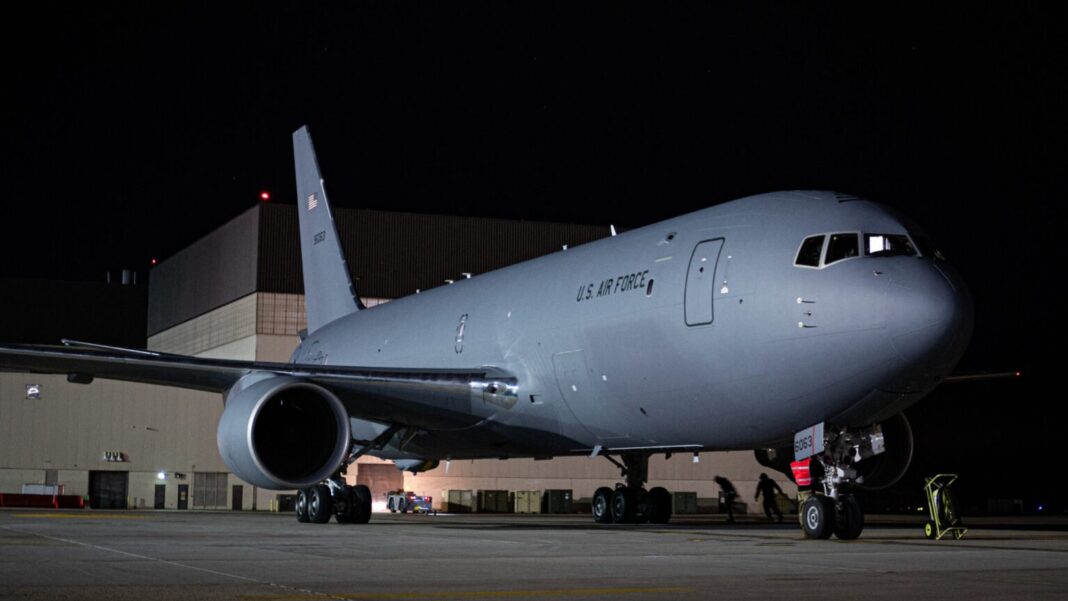 The US Air Force has held off on approving Boeing’s new design for the KC-46 tanker’s beleaguered Remote Vision System due to ongoing technical concerns associated with the aircraft’s panoramic display system — a separate suite of cameras used to detect and identify aircraft approaching the tanker to get fuel.

A preliminary design review (PDR) for the Remote Vision System 2.0 took place in May 2021 and was expected to close last fall. However, Air Mobility Command recommended that the service wait to approve Boeing’s design until a resolution is reached on the panoramic display system, said AMC spokesman Col. Damien Pickart.

“Despite the delay with PDR closure, we remain confident in the ongoing efforts of the joint USAF-Boeing technical team to identify and address deficiencies so as to ensure the KC-46 can safely perform its primary aerial refueling mission,” he said.

Boeing declined to comment about the issue, which was first reported by Aviation Week.

The two camera systems are separate but intertwined in the refueling process. The panoramic system is designed to detect and identify planes at a certain distance as they come in for refueling, whereas the RVS system provides video imagery that allows the boom operator to steer the refueling boom into a receiving aircraft and safely transmit gas.

The RVS has suffered longstanding issues. The Air Force has maintained that the original RVS system does not provide quality imagery in certain weather and light conditions, making it sometimes difficult for operators to refuel aircraft and leading to increased safety risks.

After years of disputes, Boeing and the Air Force reached an agreement in 2020 that the company would design a new “RVS 2.0” system comprising more modern cameras and sensors at no cost to the service. That effort is ongoing and remains on schedule, said Air Force spokeswoman Capt. Samantha Morrison.

However, the RVS 2.0 deal did not include the panoramic displays at the boom station or the panoramic camera suite at the back of the plane, a defense official with knowledge of the program told Breaking Defense. In certain lighting and weather conditions, the panoramic display system does not meet its requirement to detect and identify aircraft, and Boeing has not been able to correct this deficiency to the Air Force’s satisfaction.

Boeing is locked into a $4.9 billion firm, fixed-price contract to design and develop the KC-46, and is financially responsible for cost overruns associated with technical problems.

Once the preliminary design review for RVS 2.0 is approved by the Air Force, it will become the official government design specification for the system, and any changes to that baseline will come at the Air Force’s expense. For that reason, the Air Force is hesitant to approve the new RVS 2.0 design without having assurances that the panoramic display system will be fixed — and, just as importantly, unless it understands whether Boeing or the service will be responsible for paying for it.

“We’re kind of at an impasse,” the official said.

The limitations of the original RVS have been the main barrier keeping the KC-46 from becoming fully operational. RVS 2.0 is expected to be available as early as 2023.

In the meantime, the Air Force has approved the KC-46 to conduct limited operational missions for US Transportation Command, allowing the tanker to be used to refuel certain aircraft. (Stealth planes like the F-22 and F-35 remain off limits due to fears that their low observable coating could be damaged if warped imagery from the RVS causes a boom operator to accidentally graze the aircraft.)

“The KC-46A can now support nearly 70 percent of all receiver aircraft that request air refueling support from USTRANSCOM,” Lt. Col. Kevin White, Air Mobility Command’s deputy leader of the KC-46A cross functional team, said in a statement in December. “In addition, we are putting the Pegasus against our highest priority missions such as direct Presidential support.”

The new report states the actual cost of the Navy’s projected fleet could be 43%...