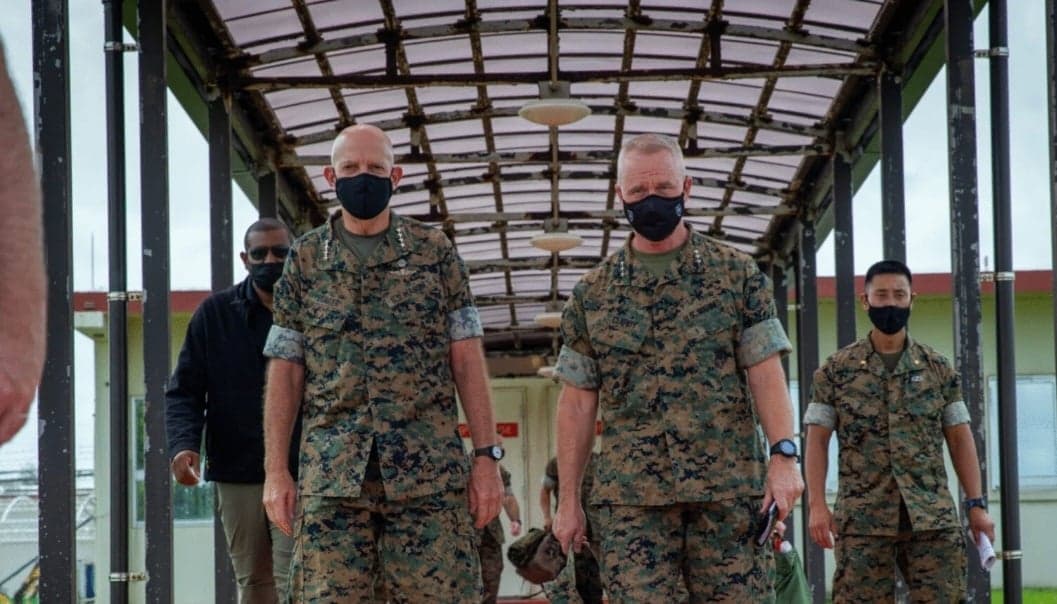 Marine Commandant Gen. David Berger is hesitant to jump to conclusions about how the war in Ukraine should influence the future Marine Corps, but he is certain of one thing: it has reinforced the value of sensors, and by extension information, in a war zone.

There is a “ubiquitous set of sensors that’s been thrown up into space and below space over the last couple years… If we’re going to operate in an environment that’s pretty much saturated with sensors, then you’ve got to be able to find the other person and hide yourself the best you can,” Berger told a group of reporters at the Pentagon last week in the run up to the Modern Day Marine Exposition in Washington, D.C.

“It doesn’t win the war,” he added, but, in Berger’s mind, you’ll likely lose the war without it.

Berger’s comments came ahead of the service publishing its report on updates to Force Design 2030, an overarching strategy document that envisions how the Marine Corps will — and in Berger’s view must — change in the coming decade to remain ready as the country’s crisis response team.

The top Marine, flanked by the service’s most senior enlisted man, Sgt. Maj. Troy Black, discussed with reporters the conflict in Ukraine, the controversy stirred by a group of retired general officers over his vision for the future and various other topics ahead of the exposition this week.

In Ukraine, Not Too Early To Take Notes

Berger said he’s learned to be patient when trying to draw conclusions about ongoing wars because he, and others, have gotten things wrong in the past when they made significant decisions or policy changes too early in the fight.

But that isn’t to say he’s not taking notes. For one, the more distributed nature of combat that the Navy and Marine Corps have been discussing for several years now is looking like the right way to go.

“The large, bulky formations that have logistical requirements to sustain them, they’re easy to detect. They’re just giant slow-moving targets,” he said, and the Ukrainians are proving it “in spades.”

A multitude of videos have been shared on social media of the Ukrainian military attacking Russian forces using drones or the Next-generation Light Anti-tank Weapon. Berger noted that militaries traditionally install the best armor on the sides or underbelly of a tank because those are the most likely places to get hit. But the Ukrainians, he says, have demonstrated the top of the tank has become the critical weak point.

The “Ukrainians have capitalized on that. Top-down attack, loitering munitions, hit the softest spot — it’s not about punching a hole through the side. It’s actually about disabling the vehicle and you’re watching that real-time [right] now.”

Early in Berger’s tenure as the commandant, he decided the Marine Corps would divest of certain armor assets, such as tanks. Has the conflict in Ukraine changed his views?

“Absolutely no,” he said.

Tanks have a role in a sustained land campaign, he said, but that’s not what the Marine Corps brings to the joint force.

Amid Controversy Over Strategy, Berger Says He’s Focused On Evidence

In April Politico reported on the plans of two dozen former Marine Corps generals who are trying to thwart Berger’s efforts to make significant changes to the service.

Berger told reporters he’s made it a point to put aside the names and faces as well as any emotions he may have about what was said, and rather focus on the evidence he has in front of him.

“Here is the body of evidence that shows this is the future operating environment, the best picture we have. These are the capabilities that we’re going to need in order to operate in that environment,” he said.

If someone can show him evidence that proves otherwise, he’s eager to see it, but to date that has not happened.

While some retired general officers may not like Berger’s ideas, lawmakers for the most part have appeared to embrace the commandant’s changes — or at least most haven’t publicly criticized them at length.

While Berger emphasized that he wasn’t taking what the former officers are saying personally, he also stressed that lawmakers are not “unwitting” pawns in his plans, a characterization the former generals made.

“They [Congress] may disagree with discrete portions of [Force Design 2030], but they’re not at all unwitting sort of partners in this,” Berger said. “They have coached and mentored and been advised all along the way.”

Berger said the Navy and Marine Corps last fall were directed by the Navy secretary to work together to figure out what the updated requirement is for the Marine Corps’ favorite warship, amphibs. The long-standing number the Marine Corps has cited from previous studies is 38.

The new studies are completed, and Berger said the results will likely become public in the coming weeks, but he gave reporters a brief preview.

“You will not be surprised at the outcome… It’s not less. It’s not fewer,” he said.

Force Design 2030 is inherently a long-term plan and Berger’s time as commandant will end in 2023. So, what’s left to do before he permanently exits the Pentagon?

“Training and education [and] talent management are where we’re going to put our shoulder into,” Berger said.

And why? Simply put, if you don’t have people to operate your equipment then the equipment isn’t worth much.

“The way that we conduct schools training [is] still to some degree a lot like it was when [the sergeant major] and I went through schools 20 years ago,” Berger said. “We have to invest in that. We have to now.”

During the roundtable, Black, the sergeant major of the Marine Corps, only spoke a few times to supplement Berger’s comments. But his remarks about the difference the service’s people — the individual Marines carrying out missions — can make strike a much more powerful tone considering the conflict ongoing in Europe.

“What’s our nation’s greatest strategic advantage over any adversary? It’s the individual. It’s the team that they’re a member of, and it’s what the team can do,” he said. “It’s not the equipment. We will never win in massive quantities of equipment against a peer adversary. We just don’t do that. It’s the quality of our people.”

Black is far from the first Pentagon leader to say that, but the words carry new weight as the world watches the Ukrainian military — and the country’s civilians — fend off the much larger, although severely demoralized, invading Russian army.

The delicate compromise between the US, Russia and China „may actually accomplish something,” said Victoria...